A Club is Born (1934-36)
The tennis Club was formed in 1934 using three grass courts on the grounds next to the bowls club. It stayed here until 1936 when it moved to its present site. Here, six hard courts with a macadam surface and a wooden pavilion were constructed (the Club had taken out a mortgage with Potters Bar Urban District Council).

Post War (1945-1949)
Unfortunately during the 1939-45 war the Club was unable to meet its financial obligation and the Council therefore took possession. A small number of members were able to keep the Club going during the War and in 1946 it began to expand. At that time the Council's Policy was to rent one court annually to each of six organisations and so the Club had to proceed for a few years on only one court. In 1949 it joined forces with the Young Conservatives, who were renting one of the courts at the time, and the other organisations gradually gave up their courts or amalgamated with the Club. For these reasons, the Club eventually regained the use of all six courts some twenty-five years after its first venture onto the site.

Leases (1972-1980)
In October 1972 the Club signed a seven year lease with Potters Bar UDC for the use of the six hard courts and pavilion. Subsequently in October 1980 a twenty-one year lease was signed for the existing property with the new Hertsmere BC. This favourable lease required the Borough Council to maintain the courts, stop netting and structural part of the pavilion in good repair. The Club continued to attract members having a good social and competitive membership playing matches in the Middlesex and Hertfordshire leagues.

Pavilion Burnt Down (1986)
In 1986 the old pavilion was burnt down and the present brick/wooden pavilion was built the following year by Hertsmere. The trigger that started the fire has never been confirmed.

Lottery Grant (2001)
In 2001 the LTA secured a lottery grant from Sport England towards a rebuilding and restructing project for PBLTC. All six courts were totally re-built from foundation level; three were built with synthetic surfaces and three as new hard surfaces. Within a few years the Club funded for the three hard courts to also be built as synthetic surface courts. Interior changes were also completed at this time. These included a disabled toilet and wheelchair access to the Club pavilion.

Below are just a few articles taken from newspapers in the early days of the club.  If you are interested in further articles please contact [email protected] 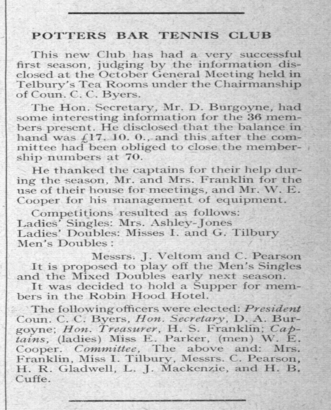 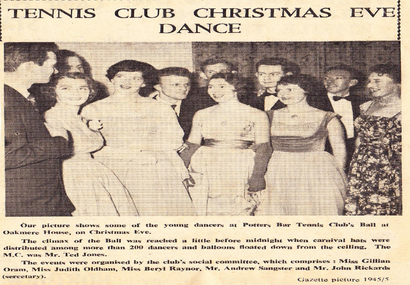 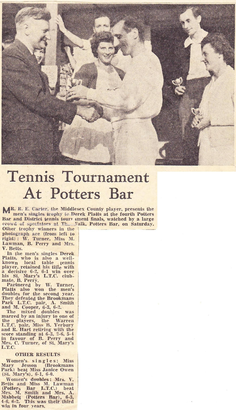 To join our club

Details of Data Controller are